About 2 years ago I started using AWS ElasticBeanstalk more. Not coincidentally, this is when AWS added Docker container support for Elastic Beanstalk.

First, Elastic Beanstalk is AWS's PaaS offering that provides an easy-to-use service for deploying and scaling web applications. This is sort of AWS's version of heroku, at least it is in the same space. Once code is uploaded to Elastic Beanstalk, it automatically handles capacity provisioning, load balancing, auto-scaling, and health monitoring for the application. At the same time, developers retain control over the underlying AWS resources that support their applications.

With Docker support though, Elastic Beanstalk provides a way for developers to use whatever programming language and application server they desire for their service. Developers are empowered to configure the Docker container and install extra packages and libraries that are needed without having to customize the server itself. Elastic Beanstalk handles deploying the Docker container for them.

As with most AWS services, Elastic Beanstalk is great and simply require some tooling on top of the service to speed up the flow. This post covers the jack tool that be use to quickly create and manage Elastic Beanstalk environments.

Jack and the Elastic Beanstalk

I'll go over some short example of the jack tool's capabilities. More details can be found on the README.

First, it is very easy to create new EB environment with jack. Normally with EB, you need to first create the "EB Application" first and then you can created the "EB Environment". Jack automatically creates the application for you as part of the environment creation. Here is an example to show how it works.

The hi application is automatically created and the the hi-web-stag-1 environment is created. The default EB sample app is initially uploaded to the environment so you can test the environment to make sure everything works. You can grab the dns endpoint from the EB Console and test that it works. 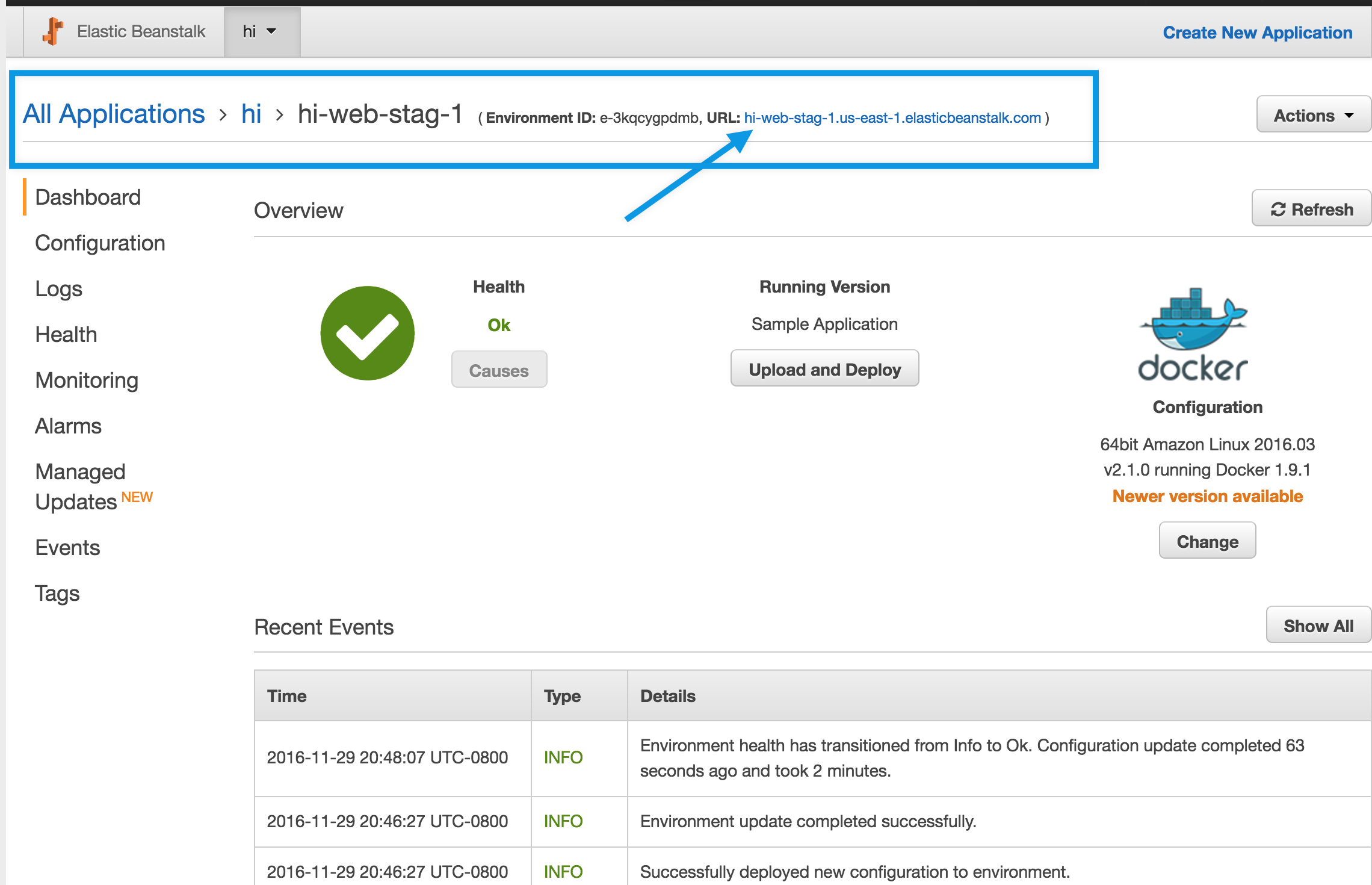 Here is the curl command to test if the app is returning a 200 response:

Creating 1 environment and having the application being created is not that big of a deal though. What is cool is that jack can download an existing environment configuration and you can use that to recreate more environments quickly. EB has a clone feature that does this also, but if you have slightly different configurations between the environments you can quickly edit the downloaded config and create a new environment from it with a text editor. I've found this flow can be faster.

Since jack downloads the entire config, it also allows you to "rename" an EB Application. The EB clone feature understandably only works within an Application. With jack you can download the configuration from an Environment in any Application and recreate it entirely under a new Application. Here is an example:

If you have 3 staging environments:

This is a very quick way to check for differences between environments and helps with debugging when someone says the "environment is down".

Another useful jack feature worth highlighting is that it will diff the config before uploading it to verify that you are not accidentally stomping over previously made changes. It is pretty awesome that Elastic Beanstalk makes it so easy for developers to use the EB Console GUI to update the environment. However, this can sometimes lead to a member of the team making changes that others are not aware of. To help with this, the jack tool will first download the current EB config and then do a diff on the config you are uploading showing you the difference. This is extremely helpful to avoid wiping out config changes accidentally.

Here is an example where the instance type is changed from a t2.micro to a t2.small.

Jack is a very simple tool and provides some additional useful commands on top the eb command like jack create and jack config. I hope that others find this tool useful too!

Jack is really cool and useful while also making it so easy to start using EB. Thank you for updating the build and for the detailed instructions, it just took me under 10 minutes to set everything up initially for it- I’m shocked at how simple it was. — Benjamin Kanter of Tuli.

Thanks for reading this far. If you found this article useful, I'd really appreciate it if you share this article so others can find it too! Thanks 😁 Also connect with me on LinkedIn.

Need any DevOps help or support? Check out BoltOps.

Useful Sublime Plugin: Fold Comment
Getting html-proofer to Work With Canonical Url for Google
How To Use Any Jekyll Plugins on GitHub Pages with CircleCI
Virtues of Great Programmers: Dilgence, Patience, Humility
Ready, Set, Start!